Holding of the Cameroon-European Union Structured Political Dialogue on January 5, 2022 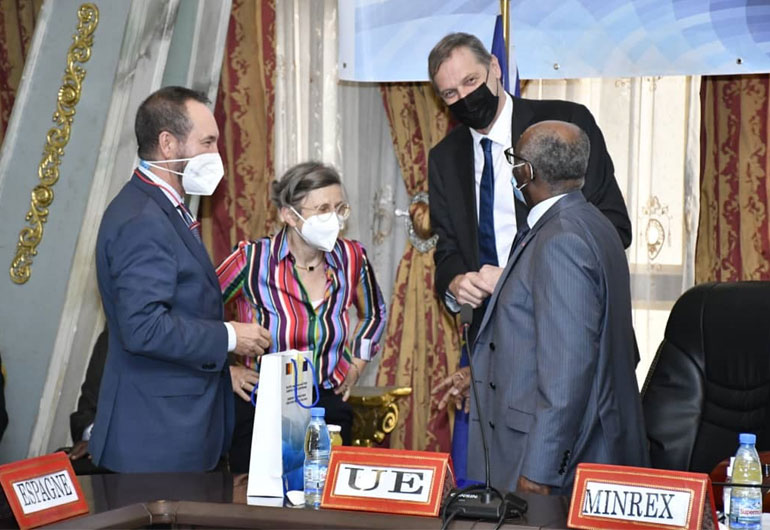 The Minister of External Relations, His Excellency MBELLA MBELLA and the Ambassador, Head of the European Union Delegation in Cameroon, His Excellency PHILIPPE VAN DAMME, co-chaired the 2021 Second Annual Ordinary Session of the Structured Political Dialogue between Cameroon and the European Union on 5 January 2022, in the proceedings Hall of the Ministry of External Relations.

The purpose of this meeting was to share views on issues of common interest discussions between both Parties centred around the following topics: the Cameroon-European Union Structured Political Dialogue: prospects in the light of the new post-Cotonou Agreement; and the management of natural resources in Cameroon.

Both Parties held rich and cordial discussions, during which they each provided relevant information, clarifications and details on the issues discussed.

Under the first topic discussed, it emerged that the nature of the partnership has evolved. It is henceforth a strengthened political partnership that is intended to be regular, balanced, more inclusive and broadened, leading to commitments that will cover all areas of the Agreement. Moreover, several changes have been recorded, including the budgeting of funds meant for development cooperation; regionalization of the cooperation; strengthening of the parliamentary dimension as well as the role of the Civil Society and the Private Sector.

The second topic, for its part, adressed the issue of natural resources management in Cameroon. Both parties committed themselves to continuing and intensifying cooperation on the sustainable use and management of natural resources. They also welcomed the signing by 133 countries of the adopted pivotal Cop26 Glasgow Leaders Declaration on Forests and Land Use, committing to halt and reverse deforestation by 2030.

At the end of this session, which made it possible to deepen and strengthen dialogue and consultation between Cameroon and the European Union on current issues, both parties hailed the smooth conduct of their deliberations and promised to meet again at the next Session in the first half of 2022.

Taking part in this important session, besides the invited Members of Government, were the Minister Delegate to the Minister of External Relations in charge of Cooperation with the Commonwealth, Heads of Resident Diplomatic Missions of the Member States of the European Union and the Ambassador of Cameroon to the Kingdom of Belgium and the European Union./-

Ambassador, Head of the European Union Delegation in Cameroon